God has been doing great things in our midst. I believe that as you read these testimonies faith will be stirred up in you for your own miracles.

Chronic sickness of many years healed
Before I joined this church, I used to suffer from one strange sickness that had defiled all treatment.
After all my effort at getting a cure failed, I somehow had to accept it as something that I had to live with. But the sickness miraculously disappeared immediately after I joined this ministry. The God of Love Walk Assembly healed me. Praise be to his holy name.
Bro U

Supernatural promotion by divine intervention
When I came into this town I was totally down. It was as if I did not have any vision and direction for my life. I started out engaging in menial jobs as a means of livelihood. But after I joined this church, my life took a different turn. It has been upwards only. Now I have a good job which could not have been possible for me to get if it was just based on my paper qualifications, job experience or connections. I am also getting married. Indeed God is really in this place.
Bro J.

Forces Working against marital destinies subdued
It is obvious that what looked like a spell in my family lineage has been broken by God who is at work in LWA. I give God all the glory. Many of my older female relatives have been experiencing unexplainable disappointments regarding getting married. Any time someone proposes and it was as if something would come out of it, one thing or the other would happen that would shatter everything. When my husband came and proposed to me, knowing what has been the experience of others and having been taught how to exercise spiritual authority over negative forces, I knew I had to take charge. I also had to apply the required wisdom in ensuring that some people remained unaware of certain details concerning the plans. To the glory of God mine went full course and the wedding has taken place. My older female relatives have been asking me, ‘’how did this happen?’’ I have been bold to tell everyone that it was no other but God at work in this church.
Sister I.

Seven years of joblessness terminated
For so many years after my graduation, I had walked the streets unemployed. Life was very difficult for me. I had to be squatting from one person to another. It was even worse seeing my parents suffer with no one to help after it was expected that at least after my graduation things would be better. But soon after I came in contact with this ministry, God opened a great door for me and I got a good job that has made life worth living again both for me and my family. I return all the Glory to God.
Bro F.

Marital happiness and joy restored
Before my coming to LWA my marriage was full of trouble. There was too much fighting. Peace and progress were scarce. I seriously had thought of leaving the marriage. I sought the prayers and counsel of my man of God and God indeed heard us. Today to the glory of God all that has changed. My home has been experiencing much peace and joy. We are really seeing a lot of progress in the family. May God alone be praised.
Sister B.

Untimely death through Accident averted
I was traveling one day in a commercial vehicle when it was laid in my spirit to start praying. I closed my eyes and obeyed. Almost immediately I started hearing shouting and screaming from the other passengers. When I opened my eyes the vehicle was already deep inside the bush. I asked what happened and everyone looked at me with surprise. They asked me whether I was not with them there. I told them that I was praying and one of them said, ‘’maybe it is your prayer that saved us. He told me that the car had suddenly started swerving and swerving uncontrollably then headed for the bush. Everything the vehicle could have smashed into was miraculously avoided until it came to a stop. It was at this point that the driver opened up to us that he worked all through the night before and did not sleep at all. So all the while we were on that trip he was sleeping most of the time while the car has been so to speak driving itself. I really want to thank God for sparing my life because it was more serious than you can imagine.
Bro. U.

Delivered from Armed Robbers
One day as I opened the boot of my car to collect my bag, two men approached me. One of them brought out a gun and asked me to give them my bag, which I immediately did. Just suddenly the word that was spoken the previous Sunday declaring that no weapon formed against us shall prosper just flashed in my spirit. A strange boldness came into me and I shouted at them to give me back my bag. Without even waiting for their response I dragged my bag off the hand of the one that was holding it. The other tried to shoot and the gun failed and they ran away. I give God all the glory for preserving my substance and sparing my life.
Sis M.

Negative medical report cancelled
I came into church with a medical report that had kept me very depressed right from the time it was handed over to me at the hospital the previous week. During the service the pastor said that there was someone who came with a negative medical report. He also declared that God had taken care of that situation. How he knew was a big surprise to me. That was surely an evidence that God was on that case and I know he has healed me.
Sis M

Got Major contract by divine favor
My company was just about to be awarded a major contract, with one of the oil multinationals when suddenly the person who was in charge of that department was transferred and a new man came in.
The new person for whatever reason decided to upturn all the things that had been concluded by his predecessor.

When I went to meet the new person he told me that there was no way he was going to give us that job. He informed me that the process will have to be cancelled and started all over again whenever he was ready. This by every definition was definitely devastating news. Ordinarily I would have been troubled but I was encouraged by all I have been taught by my man of God.

I refused to let it bother me. I continued thanking and praising God. I kept trusting God and still kept in touch with the new man regardless of his unfriendly attitude. After some months, the man himself called me. Now not only did he give me the contract, he increased the scope and value, much more beyond my imagination and even apologized to me..

God who does exceedingly, abundantly above all we can ask or think, went ahead of me and turned the situation to his glory.
Sis I

Strange objects expelled by the power in the communion
Sometime ago the devil attempted to put a very serious sickness on me. I felt very down and it was as if I was going to die. Thursday was our usual mid-week communion service and given the way I was feeling I did not see how I could manage myself to church. But somehow I had this conviction in my spirit that if I could get to church I would be fine. So I just managed and got to church.

When it was time to partake of the communion I did not want to participate. I was so afraid to put anything in my mouth so as not to throw up. It was as bad as that. I did not want to disgrace myself, I thought. Somehow I summoned courage and participated. After the service, I left for my house.

I was afraid and immediately thought of rushing to any nearby hospital. It was then I heard a voice in my spirit say, ‘’there is no need, what has been troubling you has just gone out’’. So I did not go to the hospital again but rather went home and that was the end of that sickness. God is indeed at work and I return the glory to him.
Sister IB 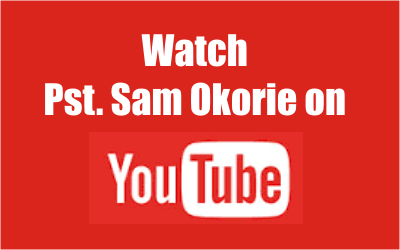